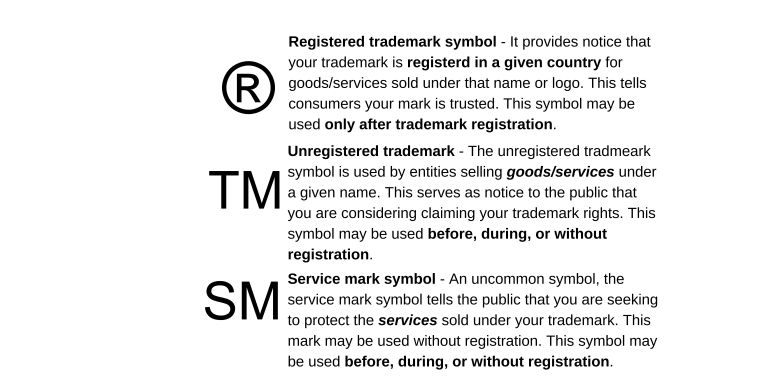 Using the right trademark symbols--such as the circled “R” (®), “TM” (™), or “SM” (℠)--tells the world what IP rights you claim. The circled “R” (®) symbol means "registered trademark." The “TM” (™) symbol means unregistered or common law trademark claim. An “SM” (℠) symbol is similar to "TM," but means "service mark." The trademark symbols provide the public notice about what intellectual property ("IP") rights you possess. Selecting the wrong symbol can come with penalties or undervaluing your mark.

Overview: Which Trademark Symbol Should I Use?

Below, I break down in greater detail what these symbols mean. In addition, I explain how you write, use, and obtain these trademark symbols.

For instance, during a televised American football broadcast, you may hear and see the following “…the NFL® is a registered trademark of the National Football League.” Here, this means that the National Football League filed for and successfully received a Registration Certificate. You likely have seen the ® symbol next to brand names. So, what does it mean to have the “®” symbol?

A. What Does the Circled “R” (®) Trademark Symbol Mean?

As explained above, the circled “R” (®) symbol means “registered trademark.”

Obviously, the circled “R” (®) symbol is the most coveted of the three symbols. It tells the world that your trademark passed the grueling United States Patent and Trademark Office (“USPTO”) Office Examination. In addition, it tells the world that your trademark is in good standing on the Trademark Register. This mark adds value by telling consumers your mark is high quality, trusted, and that you are presumably policing your brand. It also serves as a caution to would-be infringers.

For those of you outside the U.S., seeing an ® in your jurisdiction means that the trademark is registered in your country’s trademark office.

B. Can I Use the Circled “R” (®) Trademark Symbol Without Registering?

No. Using the circled “R” (®) symbol without a registration certificate is trademark fraud. Trademark fraud carries with it the cancellation of your trademark by the USPTO. In fact, it could potentially lead to significant penalties under federal law.

It is not possible to use the circled “R” symbol (®) in any of these circumstances:

Unlawfully including the (®) inside a trademark application will cause the USPTO Examining Attorney to report an application up the chain of command. See TMEP § 720.

C. When May I Use the Circled “R” (®) Registered Trademark Symbol?

D. How to Type the Circled “R” (®) Registered Trademark Symbol

On Mac, hold down “OPTION” + “R” to write ®. The OPTION key is two keys to the right and left of the SPACEBAR. On Windows, press ALT + 0174 to insert a registered mark symbol. You can also type “R” with parentheses around it “()” like this “(R),” and press the spacebar.

The “TM” or (™) trademark symbol means unregistered trademark. It is commonly used when an entity claims its common law trademark rights.

A common law trademark is a trademark used in commerce without official registration. Trademarks arise the moment goods and/or services are sold under a trademark. Their owners are allowed to use the ™ trademark symbol.

Savvy business owners use the ™ trademark symbol to show the world the claim intellectual property associated with the mark. In addition, this has the unintended effect of scaring off would-be infringers who may not know the difference between the much more powerful ® and ™. Use this symbol before and during your USPTO trademark registration filing. ™ trademark symbol does not confer any trademark protection but puts others on notice.

B. Can I Use the “TM” (™) Trademark Symbol Without Registering?

On Mac, hold down OPTION + “2” to write ™. The OPTION key is two keys to the right and left of the SPACEBAR. If you are using a Windows PC, press ALT +  0153 to insert a registered mark symbol. You can also type “R” with parentheses around it “()” like this “(TM),” and press the spacebar.

Unlike the first two, the ℠ symbol is uncommon.

The “SM” (℠) symbol stands for service mark, and is also a type of unregistered trademark. It means that the trademark is used along with services. Similar to the “TM” (™) symbol,  you may use the “SM” (℠) symbol to denote that a common law trademark claim in a service.

Most programs do not support an easy-to-use method to post the “SM” ℠ symbol. Simply bookmark this page, and return to it to copy-and-paste the ℠ symbol.

4. Where Do I Put My Trademark Symbols?

A trademark is a brand’s strongest asset. Anchored to your brand, these trademark symbols tell the world what intellectual property (“IP”) rights you claim.

6. Can I Use a Trademark Symbol in My Application?

No. The USPTO wants to see a perfectly clean “mark.” A “mark” is either a word mark or a design mark (a.k.a. “logo”). The ®, ™,  ℠ symbols are not registrable parts of any mark. If you use the ® symbol unlawfully, prepare to receive at best an Office Action refusal, or at worst, a complaint about violating federal law. A USPTO Examining Attorney will review your mark. When the USPTO review your mark, they will flag any use of a trademark symbol as not registrable and request you respond with a new mark.

7. Other Countries that Use the ® or Registered Trademark Symbol

Other foreign countries find the registered trademark symbol, or ®, useful. Below is a non-exhaustive list.

Next, we will discuss what happens if you registered your trademark in another country.

8. I Registered a Trademark in Another Country, Can I Use the Circled “R” ® Symbol in the US?

No. Trademark registration is territorial. The benefits that accrue with trademarks are limited in scope to the territory’s jurisdiction. Every county has a trademark office (often called an “IPO” or “PTO” office). If, for example, you registered your trademark in Canada, you may not use the ® in the United States. Doing so is trademark fraud, and grounds for significant penalties under federal law.

If you would like to file a trademark in another country, you may either:

9. How Do I Get Circled “R”(®) Registered Trademark Symbol?

In order to get the circled “R” (®) trademark symbol, you must successfully file for a trademark and obtain a Registration Certificate. You may follow the outline below:

In conclusion, using the right trademark symbol – the circled “R” (®) symbol, the small “TM” (™) symbol, and the small “SM” (℠) symbol – is critical in telling the world what rights you possess. Selecting the wrong symbol can come with penalties or undervaluing your mark. The circled “R” (®) symbol may only be used after a successful registration. “TM” (™) or “SM” (℠) symbols provide constructive notice regarding claiming your common law rights but confer no protectable benefit.

As a recommendation, if you would like to obtain the circled “R” (®) trademark symbol quickly and efficiently, please contact Syed Law to schedule a consultation.

Ahad Syed is the founder and Managing Attorney at Syed Law. Mr. Syed has filed hundreds of trademark applications with the USPTO. He serves clients from all 50 U.S. States and worldwide.

Protect Your Trademark, and Secure Your Business.

*Syed Law is located in Illinois, but is able to serve clients in all 50 states because trademark law is governed by U.S. federal law.